In a film workflow the industry standard was to create film output that was linear. This meant that a 25% tone request in the original Postscript file would create a 25% dot on the film, a 50% request would create a 50% dot, and so one for all requested tone values. However, in a CtP workflow controlling tonality in the print reproduction process, allows you achieve the presswork quality you want without adjusting the press. It also provides the flexibility to tailor the print characteristic to meet different customer expectations.

Dot gain, or tone value increase (TVI), is a normal part of the print reproduction process. Controlling tones using calibration means that you can manipulate the exact size of the dots on the printing plates so that tone saturation and gray balance are controlled on the press sheet.

(Note: Adjusting CtP laser exposure is not tonal calibration and will affect the run length and performance of the plate.)

Printers are used to being concerned with dot gain/TVI. Indeed dot gain values are often included in printing specifications. However, for the purposes of calibration - tonality or dot area, rather than dot gain, is the key metric. It does not matter what dot gain you have. What matters is whether you achieve the required final tone values or dot areas at each originally requested tone. 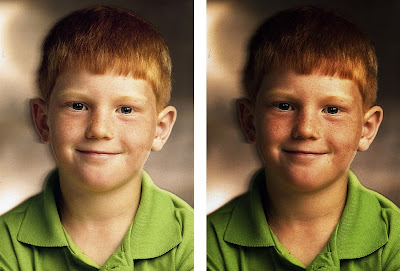 On the left is the desired "correct" tone reproduction and on the right is incorrect tone reproduction.
Tonality in printing is the progression of tints from blank paper to solid ink for each requested tone value in a printing job. It is measured with a densitometer, and reported as either dot gain/TVI or dot area: 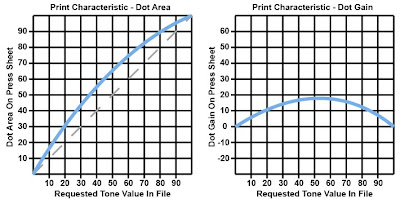 Building dot gain compensation plate curves always begins with a target print characteristic, i.e. what you want to achieve on press. This is called the target curve - the current tone reproduction that you wish to achieve. It could be your current press work, a proof, or it could be an industry supplied set of tone values. You measure the target sample and enter the dot area (tonal value) for the tints achieved on the target curve graph. If the target is a press sheet, for example, your current 150 lpi AM/XM presswork, the graph will represent your current tone print characteristic: 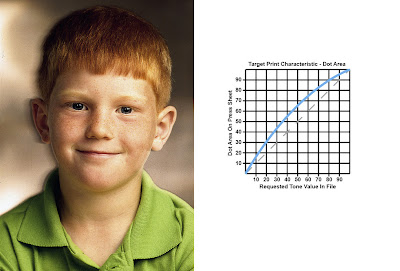 Target print characteristic tone curve - what we want our presswork to look like.
If you change your screening, for example going to FM screening, higher solid ink densities, or higher lpi AM/XM screening, etc. then, if nothing else changes, the tonal response on press will change due to the difference in dot gain: 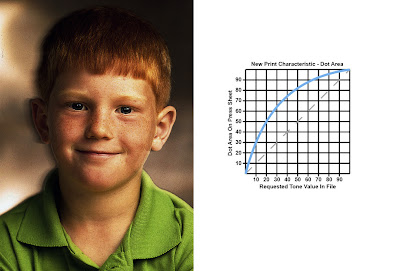 New print characteristic tone curve caused by a change in screening method being used - what the presswork now looks like after changing the halftone screening.
The goal of implementing dot gain compensation plate curves is to make the new press work mimic the original target press tone response. In the above example, the boy's face should appear the same as the original image despite the dot gain caused by changing the halftone screening.

Building a dot gain compensation plate curve starts with comparing the current target tone response with the tone response of the new presswork. In this case run to the same solid ink densities, on the same paper and press - only the screening has been changed: 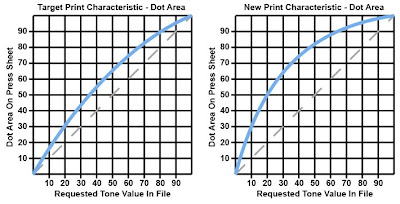 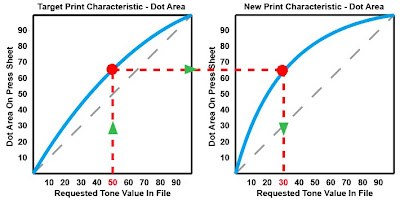 Here's another way to visualize it:

Find the tone in the new presswork that delivers the required tone response in the old target presswork.

The comparison between target curve and new current curve is made for each 10% change in tone.

The idea is then to map these values so that a tone request in the original file gets changed to a new value that produces the same final tone as the same tone request did in the old target presswork. The result is a lookup table for tone swapping. 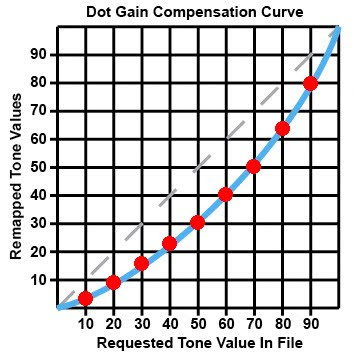 The lookup table is applied in the workflow to remap the requested tones to the actual tones on plate that will deliver the desired final tones in the presswork. The result is tonal alignment of the presswork despite differences in dot gain. 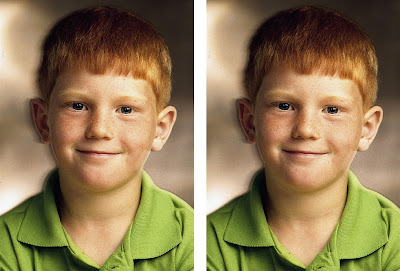 On the left is the original target 150 lpi tone response. On the right is the "normalized" tone response of the FM screen.
Some points to keep in mind