How was it printed? Simple ways to determine the printing method used.

The proliferation of new printing technologies like commercial production toner and ink jet presses as well as the rapid increase in quality of some traditional systems like flexography, has made it a bit difficult to determine exactly which printing method was used for a given sample. Was it offset or digital ink jet? Flexo or offset?

Here is a guide to help you identify which printing method has been used. The best method is to look very closely with a loupe at the letter forms and then confirm by looking at the halftone dots themselves. Although these images were taken at about 200x to show as much detail as possible, they are not that different than what would be seen by the human eye under a loupe at 10-20x.

Type edges are sharp and well defined. The ink density is similar across the letter. The paper around the printed ink is usually clear/unprinted. The sharpness and consistent ink density is reflected in the halftone dots. Note that this same sharp appearance occurs if the halftone screen used is FM (the third image) rather than AM (second image). 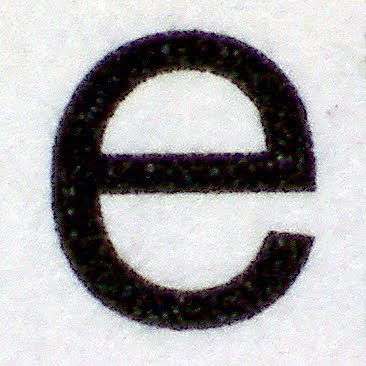 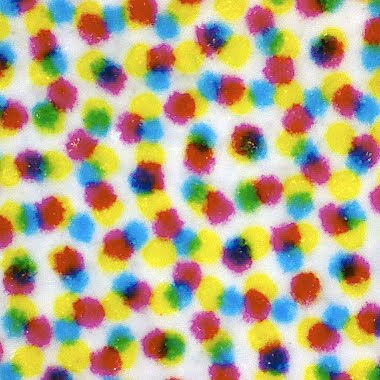 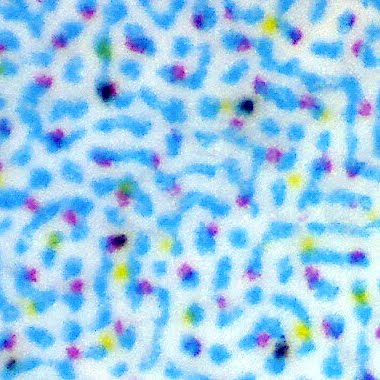 All graphic elements appear halftone screened so the edges of text show a rough halftone appearance. Although presswork color may appear rich, viewed under a loupe, the halftone dots may have a watery appearance. Individual dots may appear to have a hole in their centers. 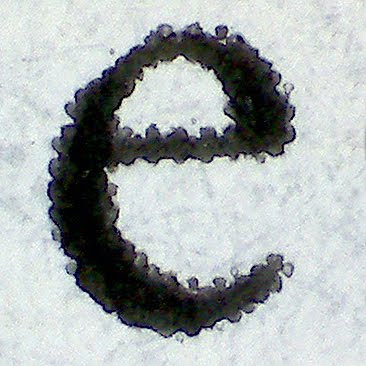 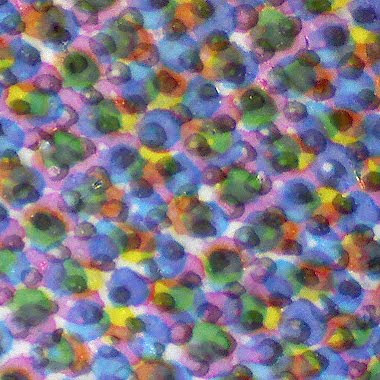 Flexography uses a rubber-like plate that, under pressure, transfers ink to the substrate. This results in type that often appear to be surrounded by a sharp-edged "halo." The same effect, but in opposite, occurs in the halftone dots which may have dark edges and light centers. Both type and halftone dots usually have very sharp and well defined edges. Note that this dot sharpness also occurs with an FM screen printed with flexo (third image). 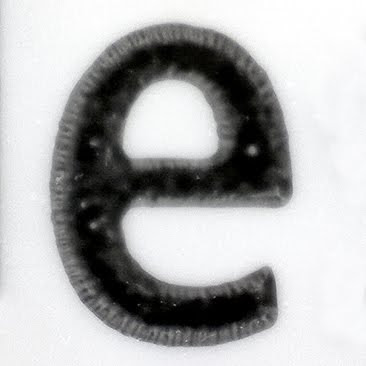 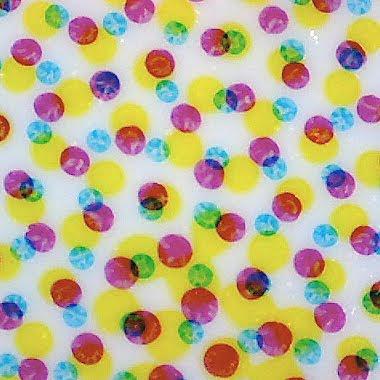 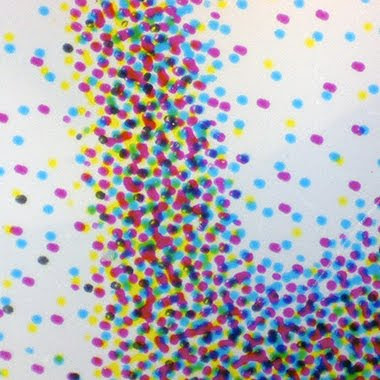 With electrophotographic systems the image is created by depositing a powder toner. This results in a "sprayed on" appearance. Type edges are soft and there are often specks of wayward toner on what should be unprinted paper. On close examination you'll likely see apparently random Yellow dots. Those are anti-counterfeiting tags. Halftone dots have a similar fuzzy appearance. 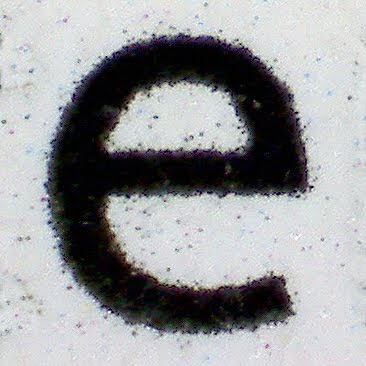 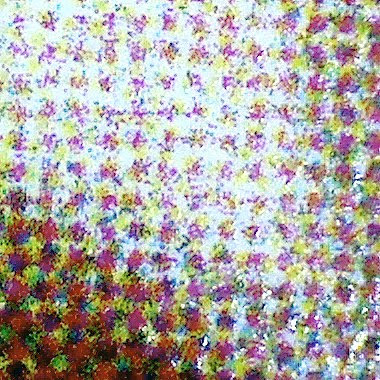 Under a loupe, ink jet type has a "blocky" "chunky" edge appearance. This is caused by the low resolution/large droplet size typical of these devices (despite the claims of high dpi). Sometimes there will be the occasional "satellite" ink droplet near the letter (two are shown in the image below). Because of the way the ink is sprayed onto the substrate, halftoned areas appear to be done with an FM screen. However, unlike the FM screening used in offset lithography, there is usually no apparent pattern or organization to the dots. 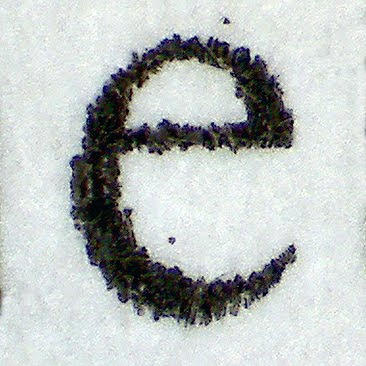 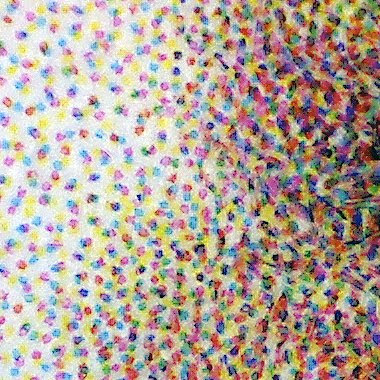 Engraving is typically used for currency/bank note printing, stamps, and sometimes very exclusive stationary. Type is very crisp and sharp. The process is capable of extremely fine detail and as a result is used to print security microtype. Halftones are usually created with line effects rather than a conventional halftone screen. Softly passing one's fingers over the printed work will reveal a tangible texture due to the raised ink. 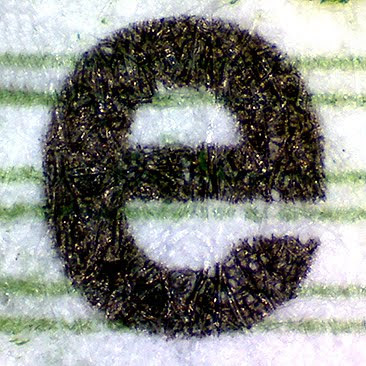 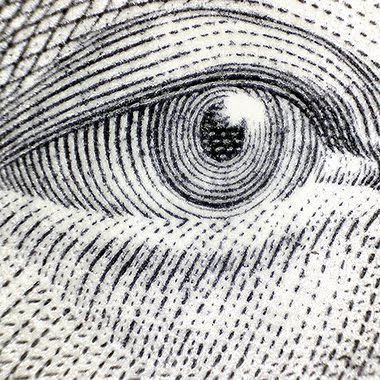 Thermography is commonly used on wedding invitations, letterheads, business cards, and greetings cards as an attractive alternative to the more expensive engraving process. Type has a raised surface texture similar to engraving however, with thermography type appears to be printed under a transparent coating. The low resolution of this process makes it unsuitable for quality halftone screening. 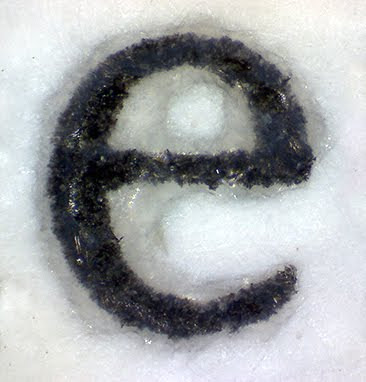 The letter "e" as displayed black against a white background on my laptop's display. Since the LCD display produces no light of its own, it requires a cold cathode fluorescent lamp situated behind the LCD panel. Electronically-modulated pixels filled with liquid crystals are arrayed in front of the light source to produce images in color. Passing the backlight through the red, green, and blue liquid crystals recreates the backlight white, while blocking the backlight creates black. Anti-aliasing of the letter helps to smooth the shape of the letter form and compensates for the relatively low resolution of the screen itself. Note that the pixels forming the image are not square but rectangles. 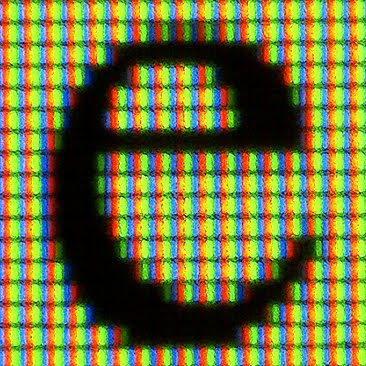 Posted by Gordon Pritchard at 6:36 PM