Warning: This post may be considered by some, perhaps many, as heresy, sacrilegious, and blasphemous – read it at your own peril. 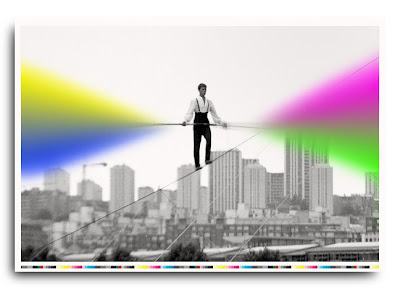 Achieving grey balance in presswork is touted as the holy grail in today's print production world. It's become the paramount metric - recently defined in unambiguous CIE L*a*b* values - for the G7™ calibration method to align press and proof color as well as for achieving presswork that conforms to GRACoL® 7. Interestingly, despite its promotion by industry pundits, as far as I can determine, there has never been a formal, objective, study of the relationship of grey balance targets measured in press sheet color bars and how they relate to the live image content of the press sheet.

While grey balance certainly has value - particularly in the initial setting up of a print production system - the grey balance targets in color bars, IMHO, have virtually no value as a print reproduction metric in day to day offset printing.

Put another way – on press, the assumption is:

I don't think so.

For one thing, the tone values 50C, 39M, 39Y are where dot gains/TVIs are at their greatest and where on-press tonality (and therefore color) is much less stable than at the 26C 18M 18Y tone values – smaller dots are proven to be tonally more stable than larger dots (which is why dot gain is measured at 50% where dots are at their largest).

Also, the 32K in the separation provides a great deal of grey balance color stability in the imagery which doesn't exist in the color bar grey balance patch.

Bottom line:
The grey balance target in the color bar is overly sensitive to minor solid ink density variations in presswork and has no tonal relationship with the screen tint values that are its supposed equivalent in CMYK separations. This is even more true in workflows that use ink optimization heavy GCR separation techniques) on incoming files. As such, the grey balance targets in color bars cannot reflect color shifts that may be happening in live presswork areas.

Put another way – on press, the reality is that:

There are other issues with grey balance being used as a process control metric in production presswork besides the mismatch of screen tint values compared with greys in the live image areas.

Unlike grey balance in scanning and proofing - grey balance on press is affected by ink usage/coverage. For example, in this press form: 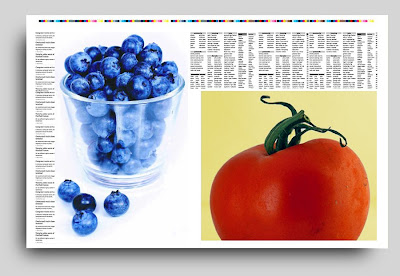 Bottom line:
The live image areas can match the proof while grey balance on the press sheet do not.

C, M, Y grey balance targets are typically located beside a corresponding 50% patch of black in the color bar. The assumption being that the press operator, by comparing the two, can make a quick visual assessment of grey balance in the presswork. There are some significant problems with this assumption.

First of all is that the visual perception of grey is affected by several factors:

1) Unlike instruments, we perceive color in the context of surrounding colors. If you look at the grey bar in this graphic:

you'll see that it appears to change its tonality depending on whether it's against the red or green background even though the grey is in fact exactly the same across its width. You may also see a slight shift in color. This optical illusion is called "simultaneous contrast."

Bottom line:
Even if the grey patch in a color bar appears perfectly neural compared with the 50%K patch - the grey within the live image area may not appear neutral due to the effect of surrounding colors.

2) Our perception of color, especially neutral grey, not only varies from individual to individual, but is also affected by age and gender. Older men (e.g. typical press operator) will not see a 3/C grey vs a 50% K grey the same as younger women (e.g. typical print buyer). You can test this yourself with a chart like this one:

On the left is the reference 50%K. On the right are a variety of 3/C greys. Try and pick out which one is identical to the reference grey. In fact, if you were to print out the patches, cut them into squares, and asked co-workers to match the 3/C patch to the 50%K patch you'll most likely see the pattern of men/women, younger/older, choosing different 3/C patches that they see as perfectly matching the 50%K one.

Bottom line:
The visual match assessment of 3/C grey and 50% K is inconsistent between people particularly buyers and suppliers.

According to a report by Greg Radencic, PIA/GATF, on Spectrophotometer Device Agreement presented at a recent Splash technical color conference, out of seven spectrophotometers tested, four had a DeltaE error over 1.5 when measuring grey balance on 80lpb gloss coated paper. One instrument had a Delta E error of 1.75, another 3, another 4 and the last had a whopping Delta E error of 7 when measuring grey balance.
The seven instruments were factory new and calibrated.

Bottom line:
The measured match assessment of 3/C grey and 50% K is inconsistent/unreliable between different types of spectrophotometers. Even different instruments of the same model may disagree.

One final issue is that a chromatic 3/C grey (50C, 39M, 39Y) and an achromatic 50% black form a metameric pair. What this means is that they may match color under one lighting condition, however, under a different lighting the 3/C grey will shift hue because it is spectrally different than the 50% black. To illustrate:

This mismatch due to lighting conditions can be exacerbated between inkjet proofs where the 50% black patch may be made up of 4/C and presswork where the 50% K is only made up of black ink.

Bottom line:
Metameric issues can arbitrarily and continuously cause 3/C grey patches to mismatch against the 50%K reference patch as viewing conditions change.
Posted by Gordon Pritchard at 3:15 PM