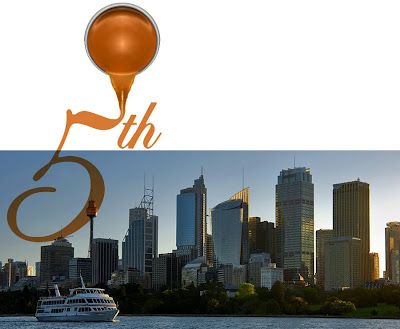 To decide which screen angle to use when a screened PMS/spot color overprints a 4/C process image you will need to look carefully at the image that you will be overprinting.

The basic rule is to use the screen angle of the least prominent (or missing) screened process color that will be underneath the screened spot color.

Try to avoid using the Yellow screen angle because in standard screen angle sets yellow is only 15 degrees away from C or M. As a result moiré is always there but it is usually not visible because the yellow is so pale. The moiré can become visible however, if the yellow becomes contaminated - or if it is used for a dark spot color.

For example, in the graphic below, the left image is Cyan (at 105°) overprinted with process Yellow at the standard 90°. The moiré is barely visible. However, in the center image overprinting Cyan with PMS 144 – a very dark yellow/orange color – using the same Yellow screen angle results in the existing moiré becoming very visible. On the right, PMS 144 uses the Magenta screen angle (75°) instead which eliminates the halftone moiré seen in the center image.

Alternatively, you could try running the 5th color using a second order FM screen. If you're using a 175 lpi AM/XM screen then the FM should be about 35 micron because if it's any finer you'll need to create dot gain compensation curves for the FM. Because 35 micron is a fairly coarse screen it is best used for fairly light colors otherwise you may find that the screen is too visible.

Because spot/PMS colors are typically formulated to be printed solid and not halftone screened, make sure that your ink vendor knows that you are going to be screening the ink and the dot size range as well (either in microns or lpi) so that they can formulate the inks accordingly.
Posted by Gordon Pritchard at 5:47 PM No comments: 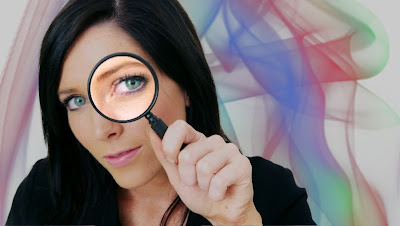 When a customer places their print order, the company has an opportunity to find out much more about customer preferences than it could ever learn through traditional market research. Even when a project is lost to a competing printer, there is an opportunity to learn a great deal about the competition. Hunches and feelings are no substitute for hard data, so gather in a database as much information about customers as possible. Building relationships is the key to success and those relationships depend on intimate knowledge. You could potentially profile your customers, workflows, and presswork so that in the future you will be better able to tailor production and service for each customer and each project. Referring to this information can also lead to better-tuned estimates, guide new equipment purchases, and suggest new service opportunities.
Posted by Gordon Pritchard at 5:45 PM No comments: 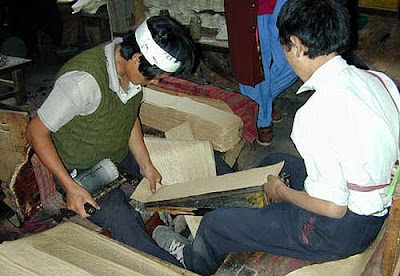 A fascinating insight into how production printing was done before mechanized printing presses that is still being done today.

Founded in 1729, The Derge Parkhang is the last remaining Tibetan printing temple of its kind. The Parkhang stores more than 300,000 woodblocks that are used to publish sutras, commentaries and histories of Tibetan Traditional Buddhism.


Please press the play arrow to view the video. Note that it may stop for a moment while the video buffers in the background.
More information can be found on the Derge Parkhang YouTube channel by clicking HERE.
Posted by Gordon Pritchard at 5:44 PM No comments:

"Click image to enlarge"
Posted by Gordon Pritchard at 5:42 PM No comments:

Mach bands are named in honor of Ernst Mach the Austrian physicist and philosopher who is also the namesake for the "Mach number" (also known as Mach speed). The Mach band optical illusion is the basis for how most image sharpening, such as the "UnSharp Mask" filter in Adobe Photoshop, is effected in photo editing software.

The principle idea is that we do not see detail because of our eye's resolving power but because of tonal contrast. For example, this is an image of a wall beside an electrical socket. The lighting used was very low contrast:

Here is the same section of wall but this time using low angle lighting:

Obviously the texture of the wall hasn't changed, instead what has changed is the tonal contrast of the area and that allows us to see the texture detail.

Mach discovered how our eye/brain leverages contrast to compensate for its lack of actual detail resolving ability.

Look closely at the below image which has nine patches of grey set between a black patch and a white.

The scallop effect is an optical illusion. To make up for our eye/brain's detail resolving deficiency it processes incoming light in such a way as to exaggerate the contrast wherever two different tones meet. Increasing the contrast at those edges gives us the perception of more detail.

What PShop does is to increase the contrast at the border between different tones by creating synthetic Mach bands.

Now we'll see the same sharpening method applied to a real image.
On the left is an original globe image straight out of the camera. On the right is the globe after sharpening is applied showing the effect of creating Mach bands with image sharpening. 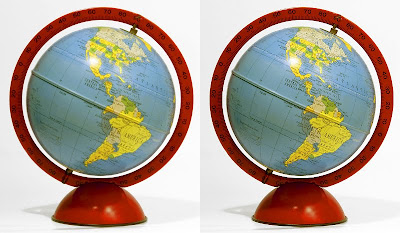 Here is a close-up section of the globe images to more clearly show the difference:

Technically, the sharpened image actually has less real detail because image pixels had to be converted to black and white lines bordering the actual image detail. However, despite having less detail our eye/brain perceives a sharper, more detailed, image all thanks to software leveraging the power of an optical illusion.
Posted by Gordon Pritchard at 5:40 PM No comments: 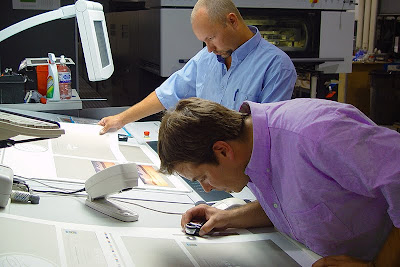 Printing is traditionally thought of as a craft-based industry. However, with print manufacturing becoming increasingly digital and automated, and processes more scientific and objective, it can be hard to see any room for craftsmanship remaining in the process.
Consider that print production actually begins in the mind of the creative designer. From the printer’s point of view, the process of translating those ideas and expectations effectively into ink-on-paper value begins at the earliest stages of the sales cycle – the project brief or request for quote.
The printer’s craft is critical in the relationship between sales, planner, and customer. It is the craft of forging effective communication, the conversion of concept into specifications, the weighing of options, and the art of negotiation.
And because no press design nor press environment is perfect, the printer’s craft is still critical in enabling the press operator to maintain the customer’s presswork intent and expectations as they are translated into ink on paper – despite all the variables that can impact presswork integrity.
Posted by Gordon Pritchard at 5:39 PM No comments: 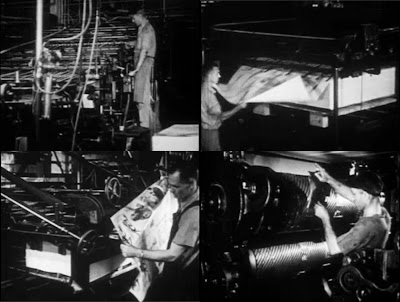 Preview images from the video
You'll often see groups of high school students brought to trade shows like Print '09 as a way to expose them to a possible career path. This clip is part of a 1946 educational film that shows various trades to students considering post education opportunities – in this case the job of a highly skilled press operator.


Please press the play arrow to view the video. Note that it may stop for a moment while the video buffers in the background.
Posted by Gordon Pritchard at 5:37 PM No comments:

What makes them so special? 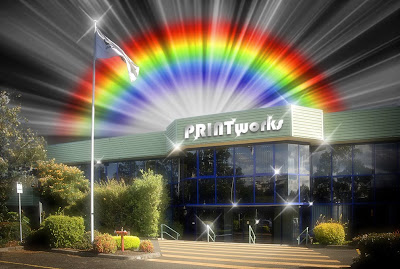 Is there a printer that you think is doing an outstanding job? Even though they may be a competitor? Why not find out what makes them so special? Since it’s not unusual for printers to subcontract presswork to cover peaks in demand, or to deliver specialty presswork, why not subcontract to the printer you admire? Even if they come in at a higher price than you would have charged, the experience gained by studying their processes might inspire you to discover new ways to make your own business something special.
Posted by Gordon Pritchard at 5:36 PM No comments: