Workin' In A Printer Wonderland - a terrific promotional video by Advocate Printing & Publishing Ltd. Pictou (and several other towns), Nova Scotia, Canada. Don't miss watching the out-takes at the end.
And then a bit of conversational artificial intellegence: 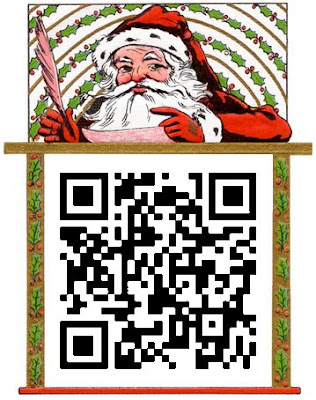 Posted by Gordon Pritchard at 5:54 PM No comments:

I recently bought a new (actually used) vehicle and typically with such purchases, there was no printed owner's manual. However, I was able to download, in PDF form, a digital version from the manufacturer's website.
But...
Why on earth is the manual a screened PDF with all the associated artifacts? 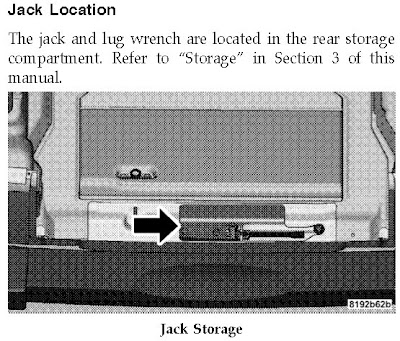 It's a PDF after all! It doesn't cost any extra to publish it digitally using continuous tone greyscale images or even in full color.

Then there's the weird demo guy.

First he has a fixed Botox-like smile that never changes: 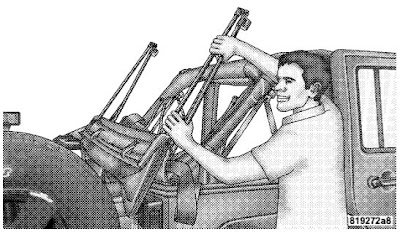 And the same illustration is used for different actions. 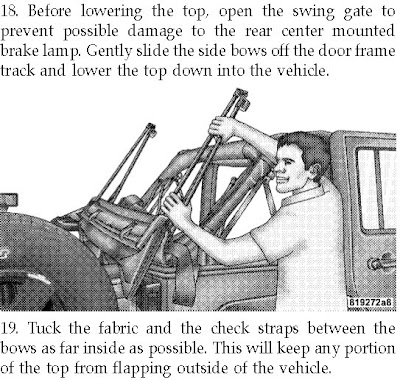 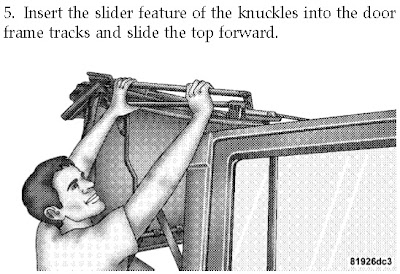 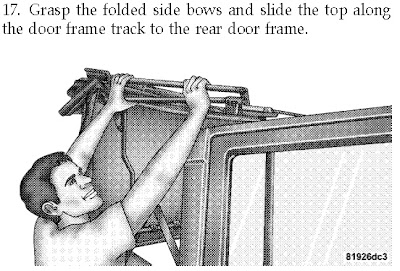 However, despite his Botox frozen facial expression, he somehow manages to change his hair style and color from page to page: 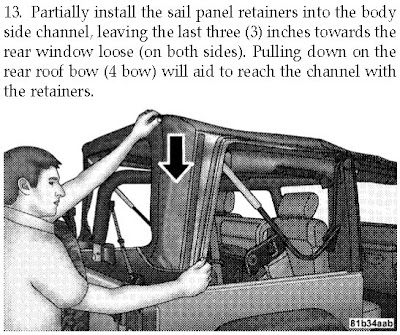 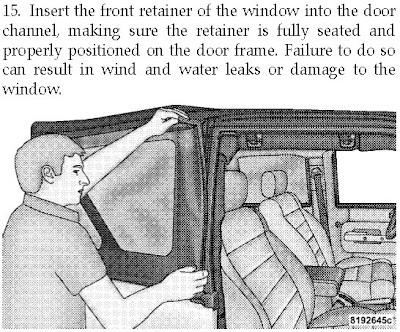 Grrrrrrrrrrr...
Posted by Gordon Pritchard at 5:53 PM No comments:

The Wayback View - At the print shop

The lyrical update to Walt Disney's well known song says it best: "I owe, I owe, it's off to work I go." And with that little ditty in mind we'll take a look at the trade workers inside the print shops of yesteryear.


Click on images to enlarge.
The art room and print area of Walling Press - a silkscreen printer. 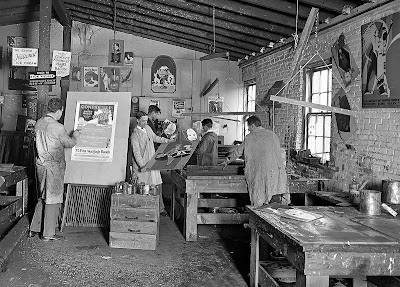 The offices of the Government Printing Office, Washington, DC in November 1912. 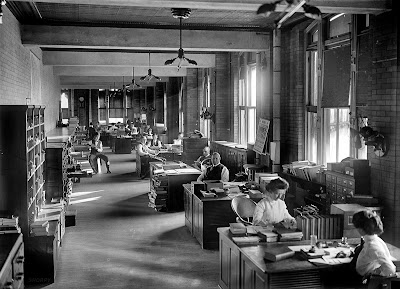 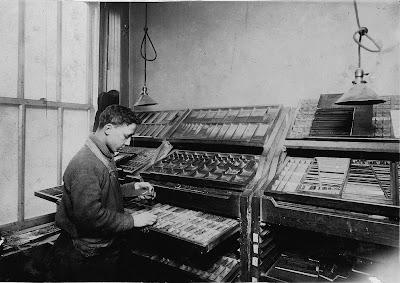 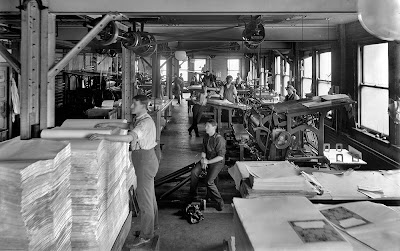 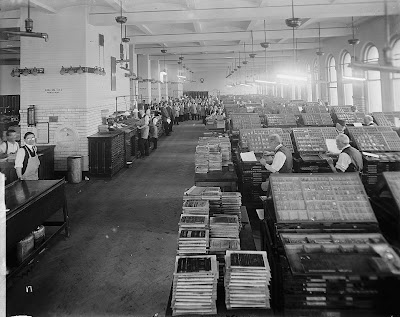 A poster on the wall in the above photograph reminds employees "Do Not Spit on the Floor". 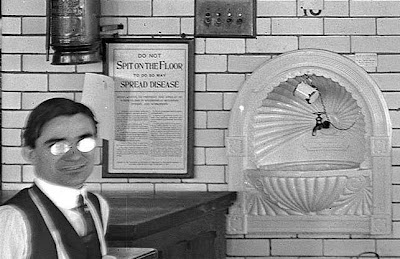 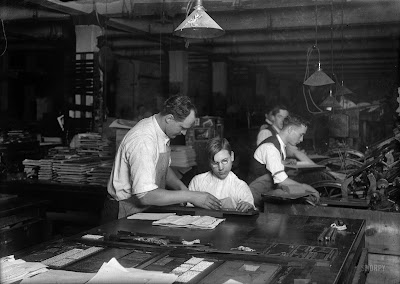 Management pretending to check a press sheet at the Government Printing Office, Washington, DC in 1937. 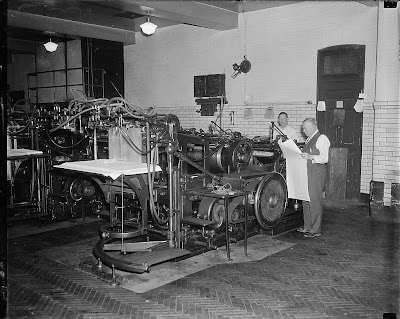 Printing postcards. As in the previous photograph, note the lack of safety enclosures on the press. Watch your fingers! 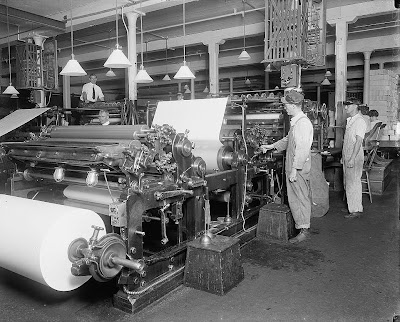 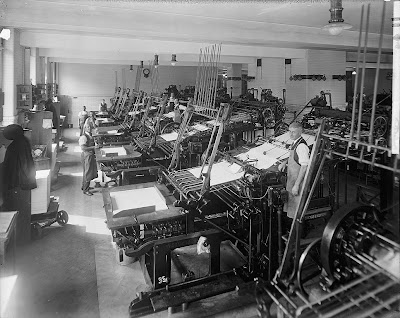 The "Old Castle Print Shop" has its name prominently displayed on the shop floor wall. Perhaps to remind employees about where they work? 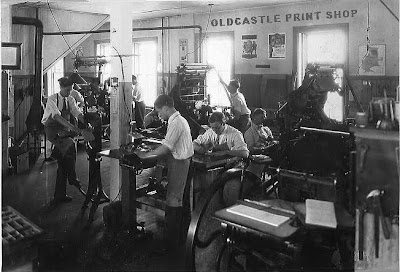 Upon closer examination, some old shop photos reveal bits of interesting information. For example, in this print shop interior dated January, 1922, there are two small posters on the back wall. 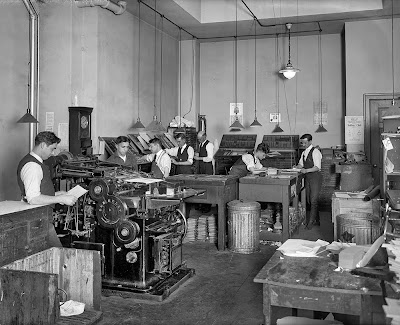 The smaller poster proclaims this to be a union shop. 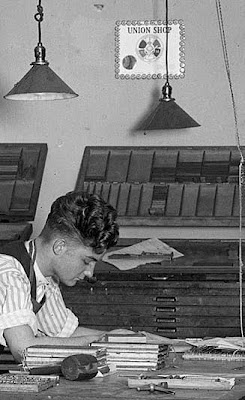 The first successful strike in the U.S.A. was organized by printers in Philadelphia in 1786. It won the workers pay raises.

The other bit of interest in this photograph is the poster on the right hand side: 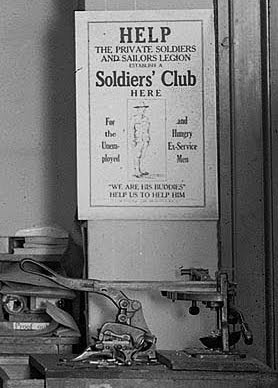 The words read:
'Help the private soldiers and sailors legion establish a Soldiers' Club here.
For the Unemployed and Hungry Ex-Service Men.
"We are as buddies"
Help us to help them.'
The U.S. entered World War 1 in April, 1917. The war ended in November 1918. But as this poster indicates, four years later help was still needed for the soldiers who fought in that conflict.

Inspecting unemployment forms at the Government Printing Office in 1937. 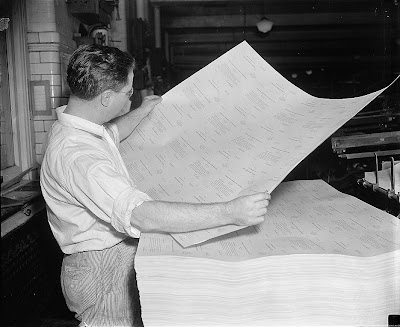 The Great Depression originated in the U.S., starting with a fall in stock prices that began around September 4, 1929 and became worldwide news with the stock market crash of October 29, 1929. From there, it quickly spread to almost every country in the world.

Automated bindery, 1910. Looking not that different from what you would see today. 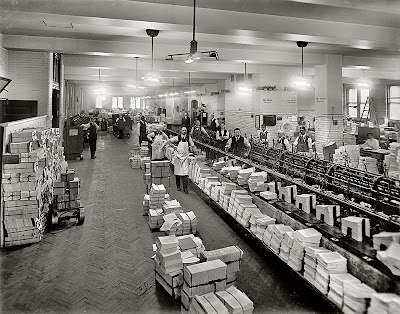 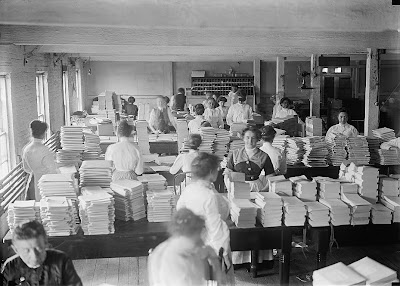 An in-house print shop in Vanier College c.a. 1940. Even nuns enjoyed a turn at the press. 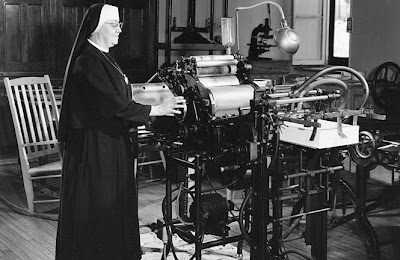 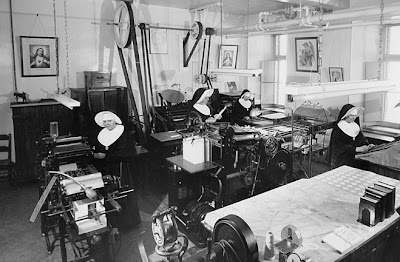