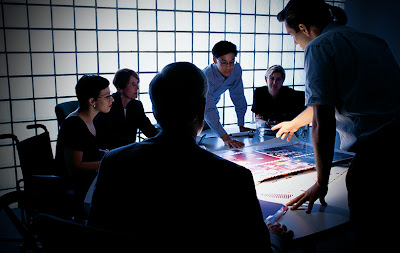 The five basic steps are:

1. Choose the appropriate standard and/or specification target for the presswork.
Management's responsibility (with input from prepress, press room, and sales) is to establish what the targets and tolerances (dot gains, standards, specifications etc.) are for the presswork - because those are marketing/business decisions. Then management must provide the tools to allow prepress and pressroom to achieve those targets. That target then drives the complete print production process and determines the selection of all of the components (proofs, press calibration, inks, paper, etc.) needed to hit the target. Worldwide the most adopted standard for printing is ISO 12647-x. The various ISO 12647 standards provide specifications for data, proofs, inks, paper and press calibration. In North America GRACoL and SWOP specifications are largely based on ISO 12647-2 and ISO 12647-3 respectively.

2. Clearly communicate with print customers about requirements for data/file submission.
This includes items such as whether files should adhere to industry specifications such as SNAP or face rejection. It may include items such as whether native application files are acceptable or only PDFs, what resolution and color mode that images need to be, what minimum text size is acceptable, etc., etc.

3. Implementation of standardized proofing.
In-house proofing must be set up to the same standard and/or specification target for the presswork (i.e. ISO 12647-x, SWOP, etc.). If print customers will be providing proofs for the pressroom then the printer has to communicate that customer-submitted proofs must adhere to the appropriate standard. All proofs must include a color control strip so that they can be verified for conformance to the target standard/specification. There should be virtually no difference in appearance between a customer-supplied proof and one done by the printer in-house. It should also be made clear that the printer's in-house proof is the final proof.

4. Optimize prepress.
The responsibility of prepress is to align proofing to the target established by management as well as to maintain proofing within the tolerances established by management. Prepress must also output plates that enable the press operators to align their presswork to the proofs with the press performing in a repeatable, stable condition. Prepress should have well defined procedures for ensuring that platemaking and the resulting plates are consistent and within tolerance.

5. Optimize press performance.
The responsibility of the press operator(s) is to manage the press in such a way that the the films of the appropriate inks (as defined by the chosen specifications) are laid down in a manner that meets the targets and tolerances (hue, trapping, etc.) established by management and that the halftone dots on the plate are reproduced with fidelity on the various substrates (slur, doubling, etc.). Also, the press operator needs to make sure that all press-related consumables (fountain solution, inks, etc.) are within the tolerances needed to achieve the management defined targets for pressroom output.
Posted by Gordon Pritchard at 5:20 PM No comments:

Not what I was hoping to post today...but...holy smokes, the Conrad Murray trial on the death of Michael Jackson has just begun and the high-priced lawyers for the man charged with the manslaughter death of Michael Jackson actually misspelled the King of Pop’s first name in a chart by Ed Chernoff, attorney for Conrad Murray. It was shown today to jurors during the defense’s opening statement in a Los Angeles courtroom. What has happened to basic proof reading? 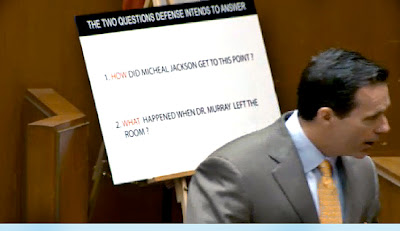 Then L.A. prosecutors also ran into spelling problems during their opening statement. On one of the slides shown to jurors, the word “pronounced” was missing the second “n.” 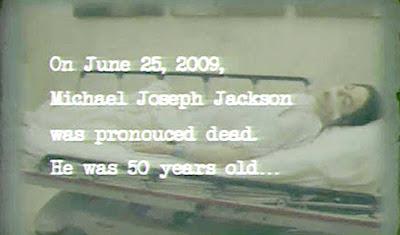 Jeepers, when a comma can mean the difference between "Let's eat, Grandpa." and "Let's eat Grandpa." shouldn't lawyers be more astute?
Posted by Gordon Pritchard at 5:18 PM No comments: 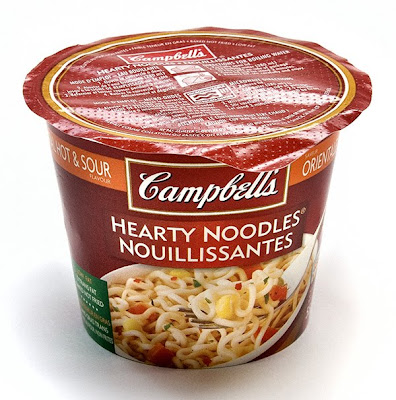 But it's been in the cupboard for awhile. I wonder what the expiry date is?
Nothing printed on the bottom or sides...but I think I see a smudge of black on the bottom left side of the cup's top cover. 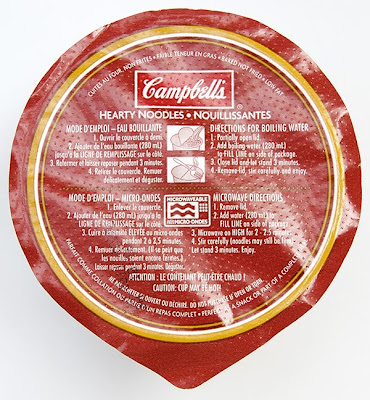 Luckily I have my loupe for a close up view. 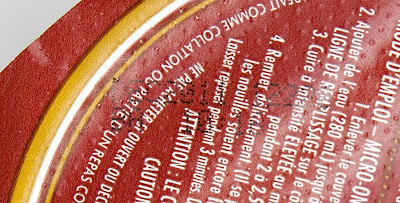 Hmmm, even viewed under loupe it's still unclear. But with a bit of image manipulation in PhotoShop the expiry date is finally legible. 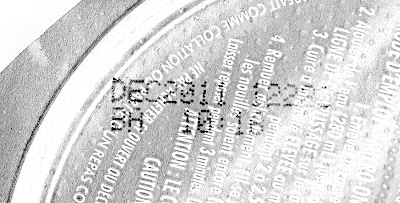 Surely the design folks at Campbell's or their packaging supplier, Interpress Technologies, can come up with a way to print a legible expiry date on their containers.
Posted by Gordon Pritchard at 5:16 PM No comments:

I've been using FM screening in presswork since 1970 (kindergartens were very sophisticated back then :-)). This was way before PhotoShop, personal computers, and digital workflows. The method I used was fairly simple, but difficult to perfect.

I would take a conventional low contrast 35mm black and white (or color slide) positive image.

I would then place the piece of film in my enlarger in the darkroom.

Then I would project the image through a piece of frosted glass that had the frosted side in contact with a piece of lithographic film. 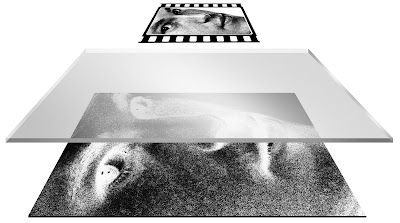 Lithographic film does not record grey levels - just black and white. It is the same film that printers use to expose their printing plates.
The rough surface of the frosted side of the glass acted like a digital threshold array and broke the image into a random halftone pattern where the frequency of the dots (and to a lesser extent their size) represented the different grey levels of the original image. 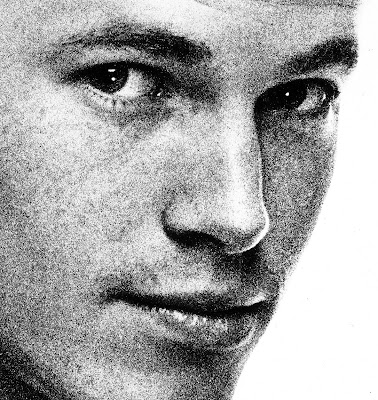 The coarseness of the frosted side of the glass determined how coarse the resulting "FM" screen was.

The final result was a piece of negative film that my printer would strip into the the job and use to burn the printing plate.
Posted by Gordon Pritchard at 5:14 PM No comments:

PRINT '01, with about twice the exhibit space of the largest Graph Expo and Converting Expo events, was scheduled to take place September 6-13 2001 at the McCormick Place Complex in Chicago. I was one of the CreoScitex team attending the show to display our wares and introduce, under my Value In Print initiative, its new consulting services.

I was staying at the W Hotel in downtown Chicago and, as was the policy of CreoScitex, I was sharing the room with a coworker. Because I had a presentation to do at the show early on the morning of September 11 I awoke about 6 am and decided not to turn on the television so as not to disturb my room mate. I took a taxi to McCormick Place and was quite surprised at how untalkative the driver was. But, after all I thought, it was very early in the morning.

Arriving at McCormick Place I quickly headed through the empty building to the CreoScitex "sales bunker" - the virtual office for sales people to use at the show. Scattered throughout McCormick Place are television monitors that are tuned to the news channel, with the audio off, when the show is not actually open. 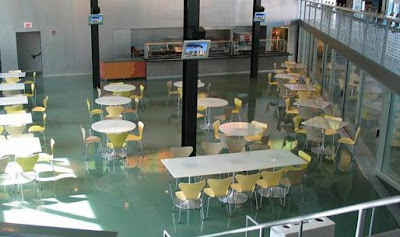 The scene that I saw on the screen just looked like a pair of giant smokestacks spewing plumes of black soot so I assumed they were doing a story on industrial pollution. 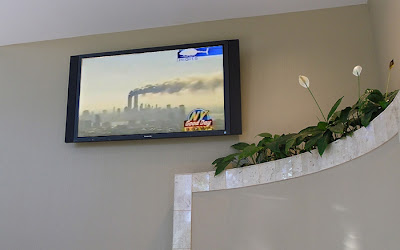 So I continued on my way into the sales bunker.

In the sales bunker I tried, but couldn't get on the Internet to check my email. Then I tried to check my voicemail with my cell phone but couldn't get a signal. Frustrated, I proceeded to the CreoScitex booth. Walking through the exhibition halls I noted that many of the exhibitor's equipment was covered with American flags. So typical of the U.S.A. I thought to myself.

I arrived at the booth and started to organize myself for the presentation that I was scheduled to do later that day. A co-worker at the booth came over to me and asked: "Have you heard the news?"

It took a while to sink in. No presentation today. This would be the last day of Print '01.

I decided to walk back to the hotel - all the time trying to get a signal for my cell phone so I could call and let my wife know that I was OK and not to worry. It was two hours before my phone was able to get a signal and I could make the call.

As news reports started coming in there was talk of a jet en route to Chicago and that the Sears Tower might also be hit. As a result, most stores and restaurants were closed. Once back at the hotel, like many of my co-workers, I just wanted to get back home. The news was that all flights were cancelled for at least the next few days which meant that my return flight ticket for September 14 was no good. A call in to the CreoScitex travel agents revealed that we were on our own to figure out how to get back to Vancouver. Fortunately I linked up with a small group in the lobby of the hotel and managed to rent a passenger van - at a highly inflated day rate.

Like fine dust thrown against the wind, evil falls back upon that fool who offends the inoffensive, pure and guiltless.
- The Dhammapada
Posted by Gordon Pritchard at 5:11 PM No comments: