The Wayback View – How color was taught

Organizing colors into some kind of system may have started some 16,000 years ago with the earliest artists, the Cro-Magnons, who lived in the cave that came to be known as Lascaux in France - as this wall painting and close up seems to suggest. 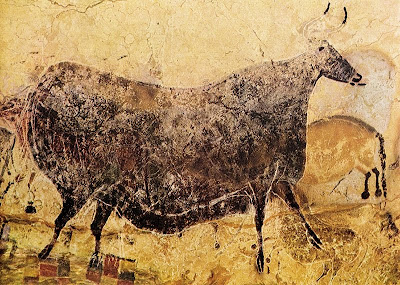 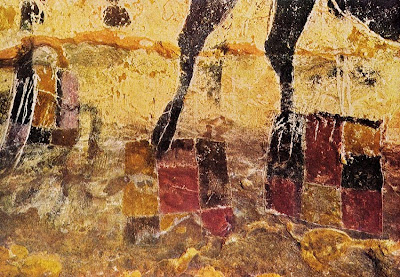 However, the oldest color system known today originates from the Finnish born astronomer, priest and Neoplatonist Aron Sigfrid Forsius, sometimes also known as Siegfried Aronsen. In 1629, a manuscript appeared in which Forsius expounded his thoughts about colors, concluding that they could be organized into a spacial order.

Forsius states: "Amongst the colors there are two primary colors, white and black, in which all others have their origin." Forsius is here in agreement with Leonardo da Vinci who, more than three hundred years earlier, had included black and white amongst the colors, seeing them next to yellow, red, blue and green as primaries. Forsius then continues: "In the middle, between these colors (black and white), red has been placed on the one side since the classical antiquity, and blue on the other; yellow then comes between white and red, pale yellow between white and yellow, orange between yellow and red ..." and so forth, until Forsius has completed the whole circle. Forsius uses four basic colors (red, yellow, green and blue) which he observes, together with grey as a "median color", between the two extremes of black and white. Forsius had the idea of introducing four basic chromatic colors, applying for each color a gray scale which runs from bright to dark along the central axis of a sphere. The colors on the sphere's surface are arranged in such a way that three opposing pairs are created: red and blue, yellow and green, white and black. Forsius had thus paved the way for modern color systems. 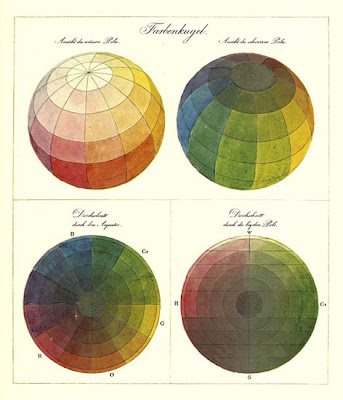 From "Handbook of Lithography" 1919 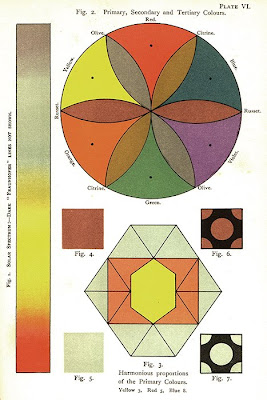 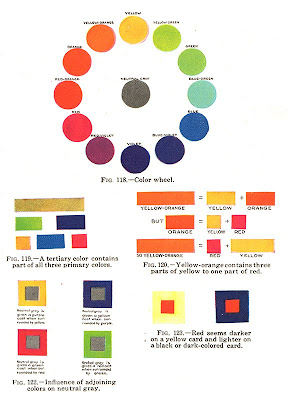 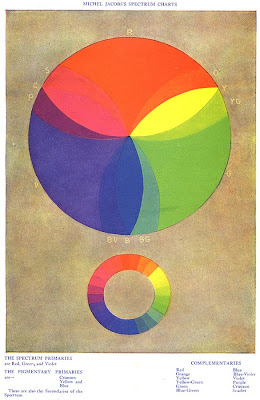 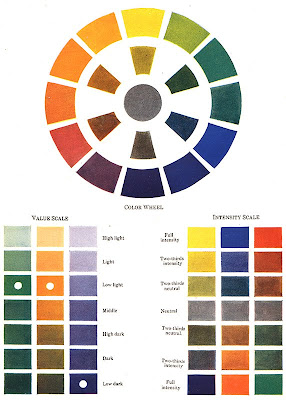 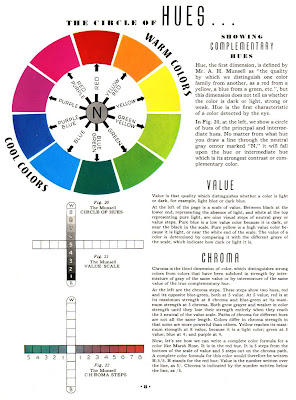 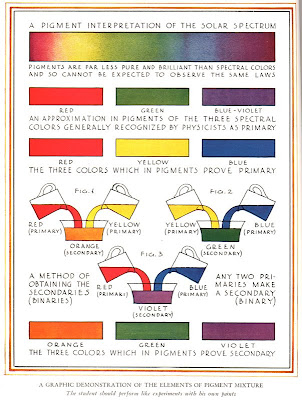 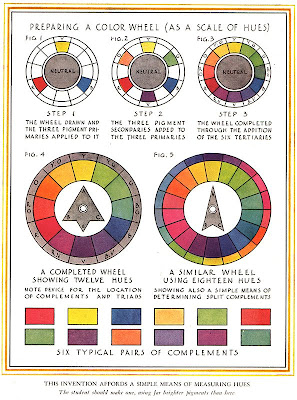 From "Practical Printing and Binding"1946 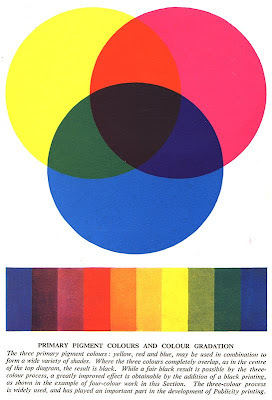 Posted by Gordon Pritchard at 5:54 PM No comments:

Labels: Color, The Way Back View 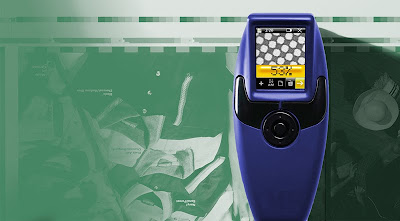 Dedicated plate readers take a different approach to measuring dot area than densitometers. What they do it use an internal CCD camera to take a continuous tone photograph of the plate area at high resolution and magnification: 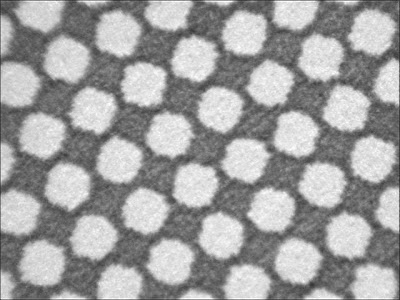 Depending on the instrument's software and display technology, this original image may or may not be shown to the user.

In order to calculate the dot area, virtually all plate readers use a thresholding algorithm to determine what is the non-printing plate and what is the printing dot.* Put another way, the software decides that a pixel of X tone level and lighter in the captured image is the plate while levels darker in the captured image than X tone level are identified as ink carrying dots.

However, because the halftone dots in the photo will have a slight softness to them, the result is a slight ambiguity as to where the transition from non-image plate to ink carrying dot occurs. Change the threshold and you change the size of the dot the instrument "sees" and hence the tone the instrument reports.

For example at a threshold value of 139 (from a range of 0-255), the software sees this as the printing dots: 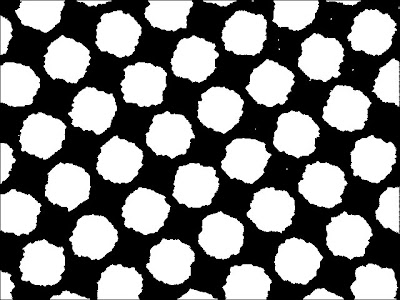 and reports a dot area value of 50%

If the threshold is a tone value of 175 the software sees this as the printing dots: 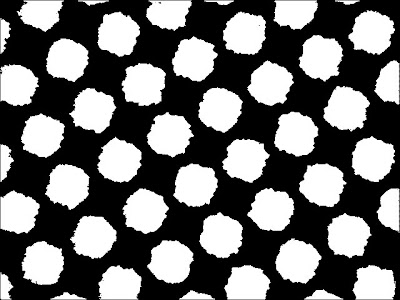 and now reports a dot area value of 55%

So which is best, or more accurate, for measuring halftone dots on plate? Well, in a GATF study of products for measuring the dot area on CTP printing plates (RTR 27: Plate Reading Technologies and Their Performance on CTP Plates) a spectrodensitometer gave very similar overall results compared to the best CCD-based solution for plates.

In their defense, dedicated plate readers can provide more information, such as halftone frequency and screen angle, than a densitometer when measuring plates.

* The extremely sophisticated and expensive Jandel planimeter requires the user to trace where they believe the dot edges are in order to differentiate between plate and dot areas.
Posted by Gordon Pritchard at 5:52 PM No comments:

Using a densitometer to measure plates 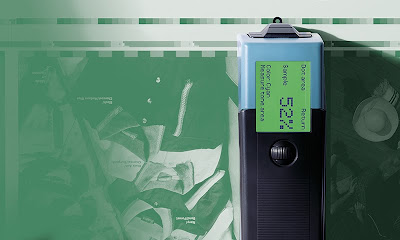 Despite what you may have heard from vendors - yes, you can use a densitometer to read offset plates. This can be especially helpful for the smaller printshops who may not have the resources to purchase dedicated plate readers.

Color reflection densitometers are designed to accurately measure Black, Cyan, Magenta, and Yellow colorants on substrates like paper. However lithographic plates usually don't have C, M, Y, K images on a white substrate, instead the plate material is usually brushed aluminum with a grey color. The color of the image itself will vary according to the plate type and vendor.

You need to be aware of these reflectance and color properties since they effect how you use your densitometer when evaluating your plates.

Because of plate color properties, the contrast between image and and non-image areas of the plate is typically less than half that of ink on paper, as a result it may not be possible to calculate dot area for some densitometer/plate combinations.

The densitometer aperture (measuring window) should be the largest possible for your brand of instrument - as long as it's not larger than the image area you are measuring. This helps average out the reading and minimizes the effect of random plate patterns.

The instrument should be set to "Status T" unpolarized in part because this setting has a wider response to the various plate coating colors.

Conventional and digitally imaged plates typically use the same aluminum base material. However the different types of mechanical or chemical graining that prepares them for lithography results in a different surface texture which in turn scatters light differently. In order to achieve consistent dot values. To help achieve consistent dot value measurements, you should try to maintain a consistent alignment of the densitometer to the plate. Perhaps using the base of the densitometer aligned to the edge of the plate. Also, zero the densitometer and read the 100% area on the same spot each time and take readings from the center of each target patch.

If you know that a patch on the plate represents a 50% tone (i.e. it is a checkerboard) but your densitometer reports the patch being, for example, a 54% tone while the plate prints correctly on press then 54% becomes the target for that patch on the plate. The idea is that you are controlling your plate imaging process by monitoring and minimizing variation. Your priority is to maintain consistency in the measured dot areas.

Alternatively you could change the dot gain calculation "N" factor. Densitometers use one of two formulas for measuring dot area; the Murray-Davies or the Yule-Nielson equation. They are the same equation however the Yule-Nielson equation utilizes an "n"-factor to "factor" out the optical dot gain (the Murray-Davies equation is equivalent to the Yule-Nielson with n set to 1.00). The n-factor is experimentally determined by adjusting it until the densitometer reads the ‘desired value’ at a known dot percentage. Typically a 50% tone is used because it is easy to spot. You'd print a number of tone values close to 50% (e.g.45% and 55%) then use a loupe to find the tone patch that ‘looks like' a 50% tone - a checkerboard. Next adjust the n-factor on the densitometer until that patch reads 50%. The n-factor is typically applied when a densitometer is used to measure printing plates since printing plates are assumed not to have any optical dot gain.
Posted by Gordon Pritchard at 5:50 PM 3 comments: 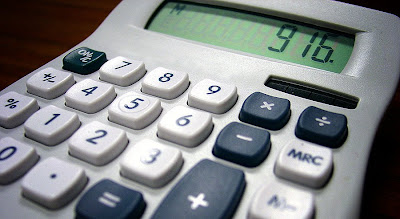 Print buyers often say their purchase decision is based solely on price – even when they know it’s not true. Unfortunately, print salespeople, brainwashed by hearing this over and over again, tend to believe the buyer. Buyers know the strategy works – so they use it. Counter this argument with a total value approach.

When you get the job, make sure that the reasons for getting the job are communicated to everyone in the production process so that they can help validate, through their work, the buyer's decision to award their business to your shop.
Posted by Gordon Pritchard at 5:49 PM No comments: