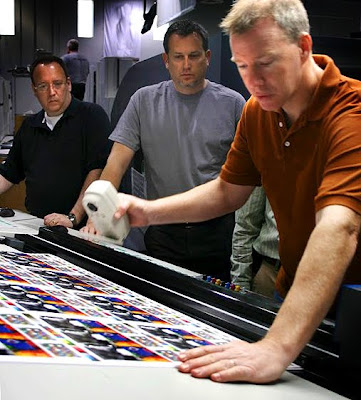 This method attempts to bring an objective, system independent, instrument-based method to color tolerancing. Because this method uses instruments to define colors, the range of tolerance and deviation from the target it is considered to be objective and unambiguous. It is much more sophisticated than the more subjective methods so far described in my other posts. As a result, a bit of background knowledge about color science is needed in order to understand how this system works and to understand its value and potential pitfalls.

A scientific approach to describing color
From a color science point of view, any color can be described by three basic attributes:

1) Lightness. This is the attribute of a color by virtue of which it is discernible as bright, dark, or somewhere between those extremes.

2) Chroma.This is the attribute of a color by virtue of which it is discernible as purity or intensity of color relative to a neutral color like grey. Also referred to as "saturation."

3) Hue. This is the attribute of a color by virtue of which it is discernible as red, green, etc., and which is dependent on its dominant wavelength, and independent of intensity or lightness. 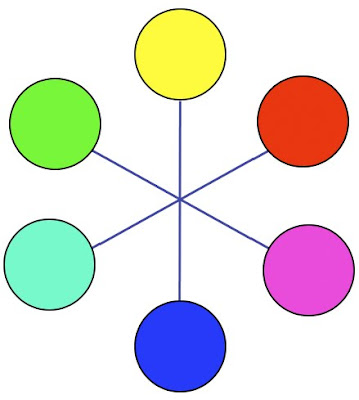 So, from a scientific point of view, describing a color requires three values/numbers. One for Hue, one for Lightness, and one for Chroma.

Describing a specific color this way can be visualized as finding the location of a specific room in a building.

One goes up a central elevator representing the range from neutral dark to light. Then one gets out of the elevator at a specific floor/specific lightness level and travels outward from neutral grey to an increasing amount of chroma/saturation as they move toward the outside edge of the building. Once they reach the desired amount of chroma/saturation one moves to the left or right to find the specific room/hue. So, directions to the specific room/color can be expressed as a recipe: Up X levels (lightness/floor level), Move X Distance (Chroma/Down hallway), Move X degrees (Hue/Along perimeter) = Room/Color.

This three coordinate method of describing a color can be visualized in cut-away form as in this graphic: 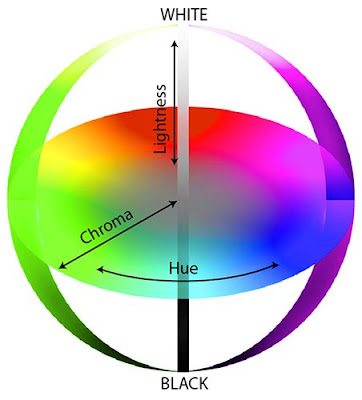 In reality this 3D color space map is more complicated (you can see a movie of a real 3D color space HERE). However it should be good enough to explain this complex subject.

This three coordinate system (LCh) can then be used to map the location of a specific color. 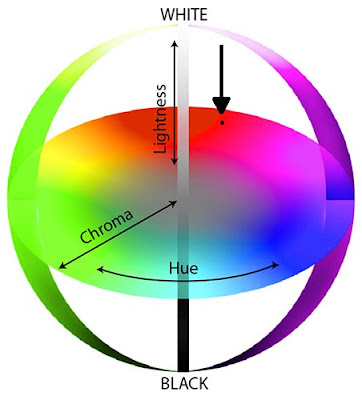 Unfortunately, LCh has not been widely adopted to describe a color's location within a color space. Instead, the less intuitive L*a*b* notation is most commonly used. L*a*b*, more properly written CIE L*a*b* uses the same 3D model but identifies the color according to it's "L" lightness, "a*" axis value (+a* = more red, -a* = more green compared to neutral grey) and "b*" axis value (+b* = more yellow. -b* = more blue compared to neutral grey). 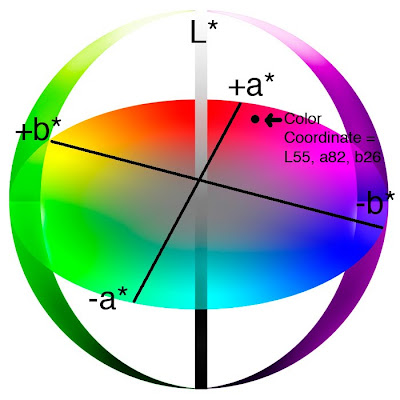 Tolerancing a color using CIE L*a*b*
Color tolerancing using CIE L*a*b* involves comparing the measurements, taken with a spectrophotometer, of a color sample (the output) to the data of a known color (the specification or input value). Then the "closeness" of the sample to the specification is determined. If the sample's measured data is not close enough to the requested color values, it is deemed to be unacceptable and adjustments to the process may be required.

The amount of "closeness" between two colors can be caluculated using a variety of methods. These methods calculate the distance between the two sets of measurement coordinates (e.g. CIE L*a*b* values) within the three dimensional color space. The size of the distance is defined by the size of the tolerance and is expressed as a "DeltaE" value (Delta Error). 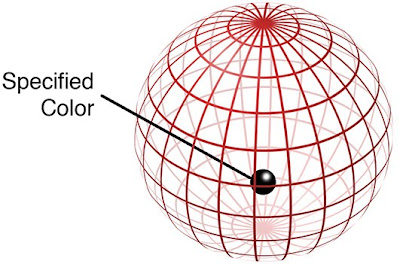 The sphere, with the specified color at its center, represents the acceptable amount of difference between the specified color and other measured samples (the color output). The actual size of the tolerance sphere is determined by the customer's specification's for acceptable color difference. The tolerance value is expressed in delta (∆) units such as ∆E usually written as DeltaE (delta error). Measured data that falls within the tolerance sphere represents acceptable color.

Typical customer tolerances in the graphic arts industry usually range between 2 and 6 ∆E. This means, for example, that samples outside the tolerance sphere lie more than 6 ∆ units away from the specified color. Tolerances less than 2 ∆ units are typically unachievable given normal process variation. Differences between two colors that are up to 4 ∆ units away from each other are usually not visible to most viewers.

Issues, concerns, and caveats when using CIE L*a*b* DeltaE tolerancing
While this method can bring an objective and potentially unambiguous method to color tolerancing there are several issues to be aware of that can cause misunderstanding and error.

1) CIE L*a*b* DeltaE tolerancing is instrument dependent, however, different instruments can deliver different values from the same color sample.
Some of the reasons include: poor maintenance of instrumentation, infrequent recertification by the factory, lack of periodic verification, spectral bandwith differences, lack of geometric tolerances, variations in fluorescence in the substrate and instrument illuminant, instrument and environment induced noise, dark current drift, variations in ambient conditions, thermochromism (ink changes color due to a change in temperature), hygrochromism (humidity changes the way ink interacts with paper and hence its color).

For example, these two color patches are made up with the indicated CIE L*a*b* values:

So, depending on the formula used to calculate the difference in color a measured sample may, or may not, be within acceptable tolerance.

3) It is harder to see the differences when colors are very saturated. It is easy to see a difference when colors are near neutral.
Formulas like CIE 94 attempt to compensate for this difference in visual color acuity, however, it is not the predominantly used formula. That honor goes to CIE 76. It's therefore important when discussing color variation to specify which formula is being used to calculate DeltaE values so that the numbers can be better interpreted.

4) The color performance of a system or press sheet is sometimes reduced to a single DeltaE value as a statement of being within tolerance. This can be very misleading since the single DeltaE value is an average of all sampled colors and will likely not reflect the performance of specific critical colors.
Statements such as "This press sheet is within 2 DeltaE of the proof" are virtually meaningless.

5) There are no CIE L*a*b* controls on a press.
If a color on a press sheet is out of DeltaE tolerance - the press operator effectively has to guess at what should be done to correct the problem using tools not designed for this function like solid ink density, water, impression pressure, etc. to effect a change in color.
Posted by Gordon Pritchard at 6:45 PM