The Wayback View – The pressman's hat

One thing you notice very quickly when rummaging around old photographs of print shops is that most press operators are wearing stylish headpieces made out of a sheet of newspaper.

Here's publisher Eugene Meyer in March 1954, proudly wearing his newspaperman's hat, as he presses the "Print Button" to run the first issue of the Washington Times Herald. 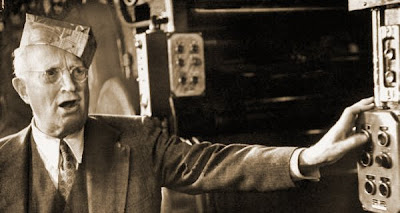 Records show that these hats were worn by press operators as early as 1748 as protection against grease, oil, and paper lint which otherwise might get in their hair.

Here, in 10 steps, are instructions for making your very own. 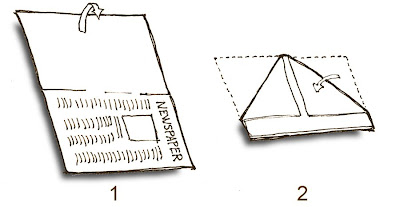 1. Start with the largest 4 page newspaper sheet you can find. Fold it once along the center line.
2.With the crease at the top, fold the top left and right corners in until they meet at the center of the page. Crease the new folds.

3. Fold a single thickness of the open edge up about an inch and crease. Then fold the same flap again as far as it will go and crease again.
4. Flip the entire hat over so that the top points away from you. 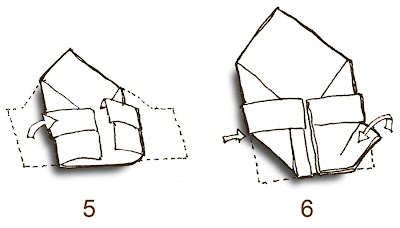 5. Fold the outside left and right edges towards the center and overlap. The greater the overlap, the smaller the hat will be. They do not need to overlap if you need a larger hat size - but not overlapping will make construction a bit more difficult.
6. Now fold the lower corners up to the hat band and crease. 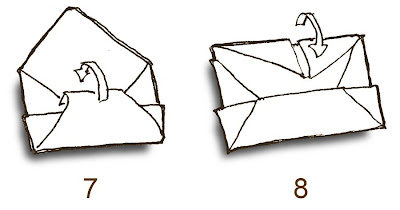 9. Pick up the hat. Open wide and flatten out the inner area to create a rectangular shape. As you do so you will see two triangular shapes form - not quite as large as in the drawing though. Fold them so that you can tuck their tips into the brim.
10. Crease the corners square on all four sides, flip the hat over and try it on for size: 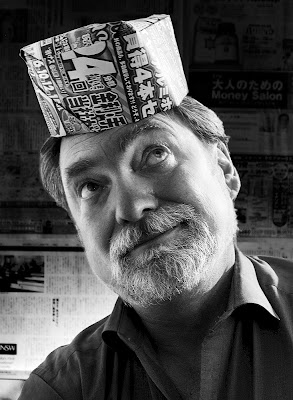 Oooops!
For this post I started with the largest newspaper I had - a Japanese broadsheet with a whopping 32" x 22" sheet size.
Either newspaper sheet sizes have gotten smaller over the years - or pressmen's heads have gotten bigger!